The eighteenth edition that will take place in a hybrid version is emerging, partly in presence and partly online, from 27 June to 4 July 2020 (www.ischiafilmfestivalonline.it).

Short films between social commitment, historical revisitations and intimate reflections, and a new section dedicated to animation works for an imaginative journey that touches almost all the countries of the world, from South Korea to Brazil, from Iran to Iceland, emphasizing the link between cinema and location.

In particular, the Short Films section extends to works lasting up to 52 minutes, putting together works of fiction and documentaries. There are eighteen competing titles. "Men are hungry too", directed by Francesco Lorusso, Gabriele Licchelli and Andrea Settembrini, stories of fatigue and pain, of emigrations and returns to their homeland, on one of the most popular places in Italy today, Salento; “Anna”, at the Berenson Dekel, about a Ukrainian woman who dreams of escaping from the tormented reality of her country by marrying a wealthy Texan; “Ape Regina”, by Nicola Sorcinelli, the meeting between an old beekeeper and a young immigrant; "The Leave", project born in the school environment of the successful Salento director Edoardo Winspeare; “Dreamless Sleep”, dreamlike journey into the jungle of the suicides of the Iranian Foad Asadi; "Up", dei filnlandesi Thomas Freundlich and Valtteri Raekallio, mixes documentary and dance for an incredible performance on the Svalbard islands; "Heimaey" (The Home Island), by Sonia Ladidà Schiavone, describes the daily life of a small island off the coast of Iceland; “The Hunter”, at Jero Yun, dystopian immersion among the xenophobic instincts that run through South Korean society; "Winter", by Giulio Mastromauro, recent winner of the David di Donatello, it is a poetic reflection on the elaboration of mourning; “Lugar Algum - No Place”, at Gabriel Amaral, tells the story of the alienation of a Brazilian farm; “Mighty”, American women's comedy on the road by Lola Glaudini; “Milk”, by New Zealand director Pennie Hunt, reconstructs the meeting of a woman with two German soldiers during the Second World War; “The Oceans are the Real Continents”, by Tommaso Santambrogio, Chronicle of a love in black and white on the background of Cuba; “The Other”, directed by Saman Hosseinpuor and Ako Zandkarimi, Iranian history of jealousy and fundamentalism; “Stunned, I Remain Alert”, at Lucas H. Rossi dos Santos and Henrique Amud, denounces the violation of human rights in Brazil; “The Swing”, by Samara Sagynbaeva, the rigors of winter in a remote village in Kyrgyzstan; "The vaccine", by the Marches Edoardo Ferraro, it is a historical drama on the theme of blood transfusions; “Weekend”, by Ario Motevaghe, allegorical observation on the violence that creeps into Iranian society.

“The Short Films section – explains the artistic director of the festival Michelangelo Messina – includes several cinematic languages, from fiction to real cinema, in a tour around the world to grasp the specificities and the different cultural identities of our planet. All filtered by the sensitivity of authors capable of condensing disparate emotions and experiences in the short space of a short film”. 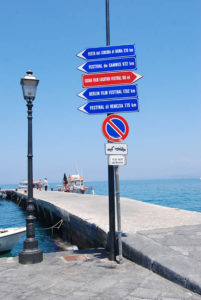 A separate space is reserved for 7 Animation works selected in competition. "Arturo and the Seagull", by Luca Di Cecca, on the bizarre dispute between a ninety year old and a spiteful bird; “Butterflies in Berlin”, by Monica Manganelli, against all forms of sexual discrimination; "The Great Wave", by Francesco Tortorella, work of great civil value on the sacrifice of a Calabrian businessman harassed by the Ndrangheta; “Makum – Drawings in an Immigrants Detention Center”, from Emilio Martí López, who in the form of a documentary denounces the segregation of thousands of innocents; “The Music Box”, at Joe Chang, set during the great Chinese Cultural Revolution; “Song Sparrow”, on the drama of illegal immigration, directed by the Iranian Farzaneh Omidvarnia; "Twelve minutes of rain", directed by Fabio Teriaca and Juan Pablo Etcheverry, films about memory and the past, with music by Sergio Cammariere.

The oceans are the real continents (Italy, 2019) by Tommaso Santambrogio

Butterflies in Berlin – Diary of a soul split in two (Germany – Italy, 2019) by Monica Manganelli